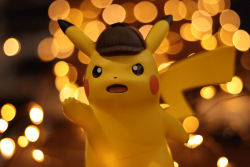 You’ve seen them. For the past few weeks, people have been wandering around their towns and cities holding their phones up to their faces in their quest to be the very best, like no one ever was. It’s likely that you’ve played the game yourself – Pokemon Go is one of the most successful apps of all time, with more downloads than Twitter and Tinder.

Pokemon made its debut as a series of video games for the Game Boy starting in 1996. They were revolutionary, providing an expansive world to explore and catch fantastical creatures called Pokemon, which you use to collect, train and battle with. The franchise influenced and changed video games forever. But just as we had thought that Pokémon had had its day, relegated to the canon of 90s childhood nostalgia, a new Pokémon game came out. Pokemon Go isn’t just unlike any other Pokemon game, it’s unlike any other popular game ever. Instead of the fictional regions of Kanto and Johto, Pokemon Go means you can catch ‘em all in your own home town. Such a revolutionary game naturally requires a revolutionary design.

Pokemon Go and Big Data are necessarily interlinked in order for a game such as this to exist. It’s a free-to-play, location-based, augmented reality, multiplayer online mobile game. The game requires a stable internet connection in order to play, and have your GPS turned on at all times. This is because the game relies on constant data. The game map is an actual map of the world, and your avatar moves relative to your actual location. The game is contingent on Google Maps, so it’s interesting to note that the developer, Niantic, is a spin-off from Google. The founder, John Hanke, is the inventor of Google Earth and the former Vice President of Product Management for Google’s ‘Geo’ division.

One impressive aspect of the game is how it seems to have been designed to fit around your town, wherever you may happen to live. Pokéstops and gyms just so happen to correspond with logical and realistic spots such as landmarks. This is no coincidence; these spots are crowdsourced from analysing huge amounts of data. This, coupled with data gathered from community feedback, effectively converts the real world into a level of a video game. Pokemon Go is now perhaps the most popular example of what can be achieved when you harness Big Data intelligently.

Whilst Pokemon was once a game you played on your own sat down in your bedroom, a game based on Big Data incentivises you to go outside, make plans, talk to new people and have fun. This is the closest a game has actually come to actually putting the player inside of a game; instead of being a sprite in a level created by game developers, you are the sprite, and your real-world surroundings are the level.

Without real-time big data, the immersive nature of Pokemon Go would be impossible. If you want to catch water-type Pokemon such as Magikarp or Goldeen, you pretty much have to hang about near bodies of water. Likewise, ghost and psychic-type Pokemon appear at night, especially around graveyards. The game’s algorithm assigns values to a variety of variables such as location, climate and time of day, and spawns Pokemon based on these values.

It’s not difficult to see how companies could seek to benefit from this technology. Businesses could potentially use this context-sensitive information and display offers depending on where you are. If you’re on a high street or in a shopping centre, you can be alerted to deals and offers from your favourite shops or brands that you can then easily take advantage of.

Similarly, Big Data can reveal a lot about someone’s behaviour, which can be taken advantage of by retailers. Consumers can then be targeted with adverts that are more likely to be relevant to them. Data such as frequent destinations and purchases can be tracked and analysed. Pokemon Go contains data of the location of all of its users who currently have the app open, as well as each user’s history of using the app. Retailers could use this data to better understand and appeal to players. The data can reveal a lot about the behaviour of large groups of it users, such as hotspots of activity for each demographic, and what aspects of the game are popular and what aren’t. This allows game developers to modify and improve upon the game, improving the user’s experience.

It’s often said that Pokemon Go is a way to play a game within Google Maps. Though there’s truth to that, it doesn’t acknowledge the other major innovation of the game, which is its augmented reality features.
Pokemon Go connects to your camera, allowing you take pictures of the Pokemon that the game has spawned. It’s a very interesting way of layering information on top of the real world, and by combining with Big Data, it has the potential for the futuristic visual scanning technology that you see in science fiction movies like RoboCop and The Terminator.

One of many industries it could revolutionise is retail: when you enter a shop, an application can give you relevant information depending on where you’re standing. You could be given information about what you bought the last time you entered the shop, and notify you of sales and offers.

The analysis of Big Data is still in its infancy, as the three v’s that categorise it – volume, velocity and variety – make it difficult to hold onto the data collected that is actually useful. Pokemon Go manages to deal with real-time big data as the algorithm it uses to spawn Pokemon is based on limited, relevant sets of data. Businesses need to learn how to find and retrieve the data that’s relevant, but as they learn to achieve this, the landscape of big data will change dramatically. We are just beginning to scratch the surface of what is possible with real-time big data capture, particularly on a scale as large as the kind seen in Pokemon Go. There are so many insights to be gleaned by organisations from large amounts of data, which can lead to improvements in technology and customer experience.