Shoot For The Clouds: How Spotify Dominates The Market 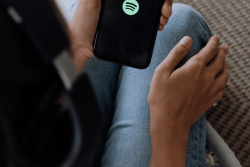 After implementing the services of Google Cloud Platform, it’s evident that music-streaming platform Spotify is closer than ever to scale up and achieve market domination.

In this case study, we will take a look at some of the secrets behind Spotify’s success.

How Spotify Dominates the Market

The cool Swedes took the world by storm when they launched their music streaming service back in 2008. Offering any music for any occasion has been the key to their success so far, and more than 75 million users worldwide willingly pay their monthly subscription fee in order to access an ad-free version of their favourite running lists, disco tunes and podcasts at any time of the day (or the night).

But this is no small accomplishment.

If you’ve paid any attention to the music scene over the past few years, you’ll be well aware that music-streaming companies -whether led by celebrities or tech gurus – all appear to come and go like a never-ending row of mediocre one-hit wonders. Spotify, however, have been here all along, and after teaming up with Google Cloud Platform they seem to grow bigger and stronger by the minute.

In order to achieve this, Spotify need to ensure rock-solid performance everywhere.

By adding over 20,000 tracks a day to its already vast catalogue, Spotify needs a stable provider that can take care of their infrastructure and scale almost instantly.

And not surprisingly, their choice fell on Google Cloud Platform.

The Swedes are not the only ones moving their data to the clouds. In fact, the rise of cloud services is one of the most important technical shifts of the past decade. Rather than keeping their infrastructure and experts in-house as was previously the norm, most organisations now find that it makes economic sense to migrate their data to cloud providers.

Indeed, it’s actually so popular that a recent survey by McAfee revealed that 97% of the businesses polled admitted to using a cloud service in their daily work. In other words, it’s turning ubiquitous.

Until recently, Spotify used traditional data centre methods, a method which was once recognized as affordable and efficient solutions. This method let Spotify continue to grow, but its scaling requirements meant it was time to take a closer look at their data centre solution and how it compares to cloud providers.

So what’s in it for Spotify? Let’s break it down.

Imagine this: you’re about to compete in a challenging track race, and all your competitors are wearing the newest running shoes and sports equipment. You, on the other hand, have managed to squeezed into a pair of jeans that are 3 sizes too small. Not very smart, is it? While your competitors quickly set off, you are slowly wiggling your way across the start line, hardly able to move in jeans that are bursting at the seams, all while desperately regretting that delicious pizza you had for dinner yesterday.

An unlikely scenario, you might say. But this is actually how it’s like for companies being trapped in infrastructure and software solution that they outgrew a long time ago. If you can’t scale up, you will struggle to move in the direction you want – and you certainly won’t be able to keep up with your competition.

With Google Cloud Platform, Spotify can now get instant access to more storage space as they continue to grow. And by offering more than 30 million songs and 2 billion playlists, it’s easy to see why Spotify needed a more flexible system. Traditionally, in order to scale beyond a certain point, your data must be distributed across several servers. With cloud services, Spotify can press a few buttons, get a few more nodes, and then scale up almost instantly.

This is a solution which is both more cost efficient, and with a higher possibility of collaboration and increased mobility.

An added benefit is the price. A cloud provider will let you have more space for less money, thereby giving you a way more flexible and budget-friendly deal than the more traditional on-premise solutions. When Spotify managed their own data centres, the organisation paid for both server hardware and network gear – not to mention leases. On-premise solutions can be expensive stuff these days, and especially if they also limit your possibilities of scaling.

By transferring their data to Google Cloud Platform, Spotify will benefit from tools such as Google Cloud VPN and Google Direct Peering to get a fast and reliable music service. In other words, this move will ensure that users worldwide will continue accessing a fast, quality music service.

Have you ever had one of those problems that keep you awake night after night? Despite spending an endless amount of hours frustratingly trying to figure it out, you still don’t manage to find a proper solution. Well, chances are that there are hundreds of people out there wondering the exact same thing.

And not even a company as big as Spotify can know everything.

While relying on the dedicated Google support team for big queries, Spotify decided that they wanted to find solutions of their own when it came to minor challenges. After all, there are some things you can only learn by experience. When facing certain obstacles in the migration process, Spotify decided it was better to reach out than to isolate themselves – and what they found was a highly collaborative environment.

One of the leading software engineers at Spotify, Dave Zolotusky, found that people from all types of organisations were extremely forthcoming and eager to help, thereby launching Spotify as an active participant in a worldwide, collaborative discussion trying to make cloud services more approachable and intuitive. “We may not have found the magical solution,” Zolotusky explained, “but we did find people who were trying to do the same thing and were maybe 80% there, and (…) happily reaching out to us”.

Before making the switch to Google Cloud Platform, Spotify spent years looking at the various cloud offerings available on the market. While using Amazon for certain needs, they still decided to keep the bulk of their infrastructure on-premise. As Spotify realized that its increasing global business would require expensive investments in data centers, they decided that it would be financially wiser to make the switch – not to mention that a quality cloud provider would save them both precious time and resources as well.

The big driving force behind the migration is to do fewer things themselves. Far from a lazy move, this decision enables them more time to do what they are really good at: innovation. With focus being a precious resource, Spotify now saves plenty of time trying to make their services work on various channels.

We can all agree that saving on time and resources are fabulous benefits, but the word on the street is that Spotify chose Google Cloud Platform due to their nearly unbeatable tools for data processing. Guillaume Leygues, a Google Cloud Engineering Manager, revealed that using Google’s services would allow Spotify to run complex database queries and get their answers quickly. This can let Spotify perform more frequent in-depth analysis, feature testing, guiding product development and more intelligent user-facing features.

Being ahead of the curve when it comes to big data technology, is a great strength for Google Cloud Platform. Especially BigQuery, Google’s managed data analytics database, was the biggest draw for Spotify. Additionally, Spotify will benefit from Dataflow for streaming and batch data processing, and Bigtable, which can potentially replace its need for Cassandra, an open source distributed database management system, and the resources it takes to manage it.

Google Benefits At A Glance

Ready To Dominate Your Market?

Armed with strong data processing tools and endless possibilities of scaling, it’s quite clear that Spotify can reach for world domination. Faster and stronger tools mean that they are able to quickly roll out new features – simply because they don’t have to readjust their own infrastructure in order to make the next big thing at Spotify HQ.

Are you ready to team up with Google Cloud Platform and reap the benefits of one of the best cloud providers out there? Get in touch via our contact page!